I would strongly recommend using the PC port of Realta Nua along with it's patches instead of the original PC game with this patch.

-For original PC version only-

Things that are not bugs:

4.2 has been released. If you really want 4.1, the password for the MediaFire downloads is 123.


Every bug brought to my attention since 4.0 was released has been fixed, including the locale and Last-Episode-at-start problems. Unlike the last version, 4.1 includes novoice.xp3. There's also a new file called galleryfix.xp3, which fixes a problem with the gallery that you'll get should you choose to remove the patch. Make sure to read the section in the readme about it.

Thanks to everyone for posting bugs.

Trying out MegaShares as a host. They only allow you to download 250mb but that's enough for this. They say they have limited download speed, but I was getting between 1.6 and 2 Mbps testing the link.

Never mind, this doesn't fix the Last Episode problem because I forgot to include the file that fixes it.
Posted by Waku Waku at 5:25 PM 47 comments:

Stick this in after the main patch. It should fix most of the crashing problems.

The ones it doesn't (such as the crash when starting the game) are caused by not having your system in Japanese locale. You can avoid it for now by changing your system locale to Japanese or using applocale.

Ok, here's a new fix. I think this should take care of everything up until now, even the locale problem. If you find something that isn't fixed please post it here. Assuming there isn't anything devastating, I'll put out a 4.1 on the 16th.
Posted by Waku Waku at 3:07 AM 70 comments: 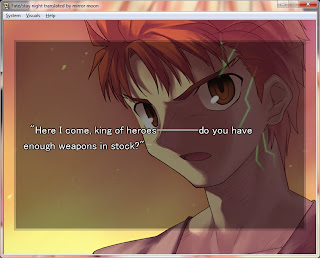 Lot's of changes. Almost all of the brand new CGs are in. I's only missing the ero replacements, one CG in Fate, and the Prologue CGs. Obviously that means the Prologue isn't included. I tried to get it in, but there were effects I'm not sure at all how to do, so I released without it for now.

New title pages. The first one replaces the all clear title from the regular PC version, the 2nd is triggered when you finish Last Episode.

CGs and BGM are now added to their galleries. Here's a image of the new CGs, minus alternate version like happy/sad faces and all of the different Shirou and Kotomine attacks.

I forgot to add saves before uploading it, so here they are. You'll probably have to rename them before using them. There aren't saves for everywehre with new CGs, just a few of the more important scenes. Includes Nine Bullet Revolver, All Evils of the World, Beauties of Nature, Fate - stay night (II), Poisonous snake, jack of all trades, and Spark Liner High. Different save for Nine Bullet Revolver, since the scene was redone from start to end rather than the middle.


For the time being, 4 is voice-only. There's some kind of problem in one of the files that makes the game crash without the files in the voice patch, but I have no idea what it is. I'll release a voiceless version when I do.

Sorry for the split archive, went over 200mb. If anyone knows a good host that does 200mb+, please speak up. Mirror will hopefully be up eventually. MegaUpload keeps saying the files are unavailable since last night, and Mediafire keeps failing part1.

There's a bug in the Assassin scenes where skipping will crash the game. I can but won't fix it (it's a byproduct of an effect), but it shouldn't be much of a problem since it's just a couple places. Please post any bugs you find.

Someone wanted me to write up exactly what this patch does, that will come later when I have more time. I only have, like, 20 minutes right now.

Huge thanks to Hyarion for extracting the scripts from the game disk.
Posted by Waku Waku at 3:12 PM 13 comments: