Fixed a couple more bugs, like the one in the previous post's comments and a different one that I noticed from XerBlade's YouTube upload that caused the second wave of clouds to not appear.

There were also a couple small changes to the recap, and then some corrections to spelling and grammar courtesy of wingzero.

Big thanks to nghtmrsrph for helping with one of the bugs.

I ran through every scene multiple times with both voiced and voiceless to make sure there weren't any more bugs, but if you happen to find any please post them here.

EDIT
Sorry about that, somehow uploaded an old version on accident. This is definitely the correct one.
Posted by Waku Waku at 11:21 PM 187 comments:

It seems a couple glitches popped up after I released 3.0. If you get a fuzzy CG flying across the screen at the end of Last Episode, or use a voiceless game and intend on reading through Nine Bullet Revolver ever again, download this new version.

I also replaced the kinda ugly pendulum with something more simple, but less headache inducing.

Thanks to the kind users who kept downloading my fix attempts until I got it right.
Posted by Waku Waku at 10:39 PM 20 comments: 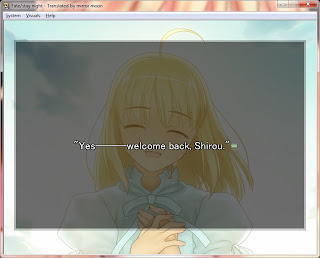 Rescripts:
Note: In order to access Last Episode, all five endings must be cleared.


Disclaimer
This patch contains materials which may violate copyright law in your country. If you use this patch but do not own a legal copy of Réalta Nua, please support TYPE-MOON by purchasing one.

The translation used for Last Episode was translated from a Chinese translation. wingzero and I cannot vouch for the quality or accuracy of the Chinese version, and, thus, accuracy of his translated version. Parts of his original translation in the Fate recap have been altered by me, mostly to match the mirror moon translation for consistency.

wingzero is not liable (legally or otherwise) for any consequence as a result of using the patch.

Sorry if the pendulum causes you to seizure.
Posted by Waku Waku at 1:23 PM 12 comments:

Okay, so I'm pretty much done. There are just a couple problems.

Problem #1: That pendulum
I don't know what to do with that pendulum. I thought I had a command that would work, but try as I might I can't get it to do what I want it to. I'll try a little more, but if it still won't work I'm probably going to replace it with a static CG.
-Solved-

Problem #2: Missing CGs
A couple of CGs are missing from my rip. They're foreground things like these:

I have black masks for them, but not the CGs themselves. If anyone has, or would like to do, a full rip with something other than Westside CD68 (I know of at least 1 other rip tool for RN, but it doesn't seem to work on my computer), please check if they're in there.
-Solved-
Posted by Waku Waku at 7:15 PM 7 comments: