New patch up! No UBW this week like I though might happen but maybe next week. I had a good amount of time this week though, so this one goes up through Day 11. I've also inserted the choices and day names. As always any QC help is appreciated.
Posted by Waku Waku at 5:01 AM 28 comments:

New Fate patch uploaded with up through day 6. Except for one of the bad ends that's technically in UBW and hasn't been added yet. On that note, a friend of mine is going to be starting on inserting text for UBW so I might also be uploading weekly patches for that soon.

As with before, any QC help is appreciated.
Posted by Waku Waku at 10:48 PM 8 comments: 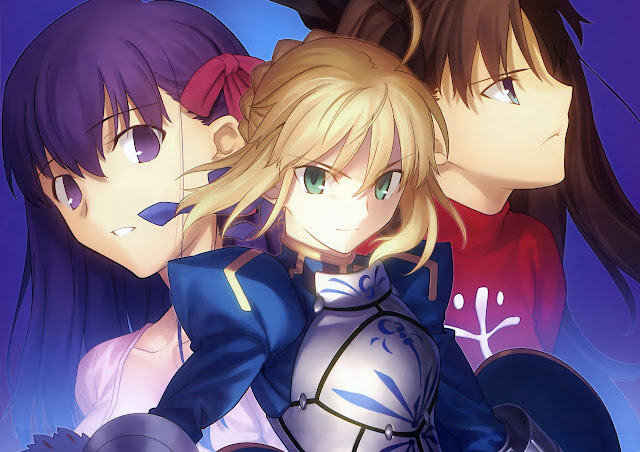 These patches are not compatible with save data made prior to Fate Patch 8/UBW Patch 1. If you're coming from a earlier version you'll need to delete your old save data (.bmp snapshots and all .ksd and .ksd.bak files). If you want a full save for the Fate route, you can find it here.

NOTE: This is not primarily a translation project and I cannot guarantee anything text-wise beyond what is already in mirror moon's patch.

The purpose of this patch is to insert the existing English translation into the PC version of Realta Nua. At the moment most of the changes in the dialogue and narration are not reflected. This includes the All Ages changes so scenes that replace the H-scenes from the original PC version are left untranslated and references to the H-scenes from the original translation have been carried over.

I plan on uploading a patch with my current progress every week. Firstly as a measure of progress, secondly since this is going to be a lot of scripts I'm worried about QC so it would be great if anyone wants to read through them and let me know about any errors. Patches that are currently being worked on will occasionally have lines marked with //del//. These are lines that were removed from Realta Nua and I've chosen to mark them instead of deleting them to avoid having them mistaken as errors.

If you find any problems, please report them here.
Posted by Waku Waku at 8:29 PM 71 comments:

The benefit this has for the current patch is that fate mode scripts make up the vast majority and with a few easy tweaks can be inserted right into the original PC version. This way I'll be able to catch a lot more of the changes besides just BGM like new sound effects, new sprites, etc.

Also while I'm working on this I plan on uploading a patch with my current progress every week. Since this is going to be a lot of scripts I'm worried about QC, so it would be great if anyone wants to read through them and let me know about any errors.

Realta Nua OP patch by MeruP
j.mp/ZrfEp2
This is planned to be included in the next version of the RN conversion patch later, but MeruP would like some feedback on how it works.

Fate Stay Night Improved Uncensor Patch by Himeros and Belldandy100
http://www.mediafire.com/?egasi1u4w1gvccl
Much better than the old one.
Posted by Waku Waku at 8:05 PM 23 comments: